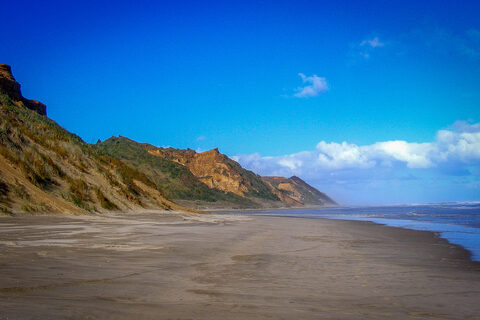 Most Kiwis know that Ninety Mile Beach is not that long (it extends only 55 miles) but not so many know that we have a longer beach. Further south on the wild west coast of Northland is Ripiro Beach, 66 miles (107km) long and full of spectacular sights.

More interesting than Ripiro's physical assets, is the fact that this is the sandy graveyard of dozens of early shipwrecks, including some which may indicate Europeans were investigating the land of the long white cloud much earlier than the record of Abel Tasman's visit in 1642.

The Kaipara Harbour is the southernmost tip of this incredible stretch of golden sand. Access for adventurers in 4WD or on horseback is via the beach roads at Pouto, Glinks Gully, Chadwicks, Mahuta Gap, Chases Gorge or Omamari, sometimes depending on the tides. Once on the beach, the Tasman sea stretches endlessly on one side, and rolling sand-dunes covered in purple heather lie on the other. Baylys (access via Dargaville) is the most popular and populous spot on the beach, with facilities here to cater for a small crowd of Aucklanders who keep holiday homes here. Surfing can be found various points and the fishing is longlining or surfcasting for kingfish, kahawai or snapper.

For scientists, especially archaeologists, Ripiro is a sandbox of goodies. Teams from international universities are studying the lignite (sedimentary rock) deposits here for the fossilised remains of kauri trees and the insights they contain into the mysteries of climate change. They can make deductions about carbon emissions based on tree ring size, from samples up to quarter of a million years old here. The dunes also hold information about New Zealand-specific events, like eruptions, evidenced by layers of ash; and kauri bogs compressed by layers of sand have preserved other scientific clues which are under investigation.

The difficulty early mariners had navigating the coastline and finding entrance to the Kaipara Harbour to the south are evident to any visitor; there are no landmarks, and there were no lighthouses until the one at Pouto was built. Studies of a confirmed 113 shipwrecks and other suspected wrecks have brought social information to light with potential impacts on the known history of New Zealand. Some are found in shallow water, some are buried in dunes which are now inland in an area known as 'Valley of the wrecks' and "The graveyard". Vague stories of ships full of white men wrecked and then eaten on this coast before and after the time of Abel Tasman may yet be confirmed.
Another unexpected find of historical interest was at Omamari towards the northern end of the beach during WWII, read about it here.

Visited Ripiro? Taken some photos? NZPlaces would love you to share them here. Tokatoka the Plug of a Volcano 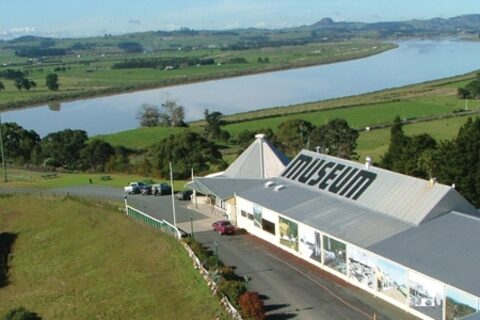